Sig sauer p320 for sale one of its most formidable handguns – the sig sauer p320 for sale – to the next level with the P320 Specter Comp! It retains all the features that the standard P320 is known for, but comes equipped with a wide array of performance enhancing innovations. Its most notable upgrade is an integrated compensator, which vents the gasses exiting the barrel upwards and away from the shooter. This greatly mitigates recoil and muzzle rise to accommodate faster and more accurate follow up shots. Other features of the P320 Specter Comp include a Titanium-Nitride (TiN) Gold finish on the barrel and trigger. The TiN coating provides better lubricity for enhanced reliability, and gives the weapon a striking appearance. The trigger itself is the XSeries flat skeleton trigger, which gives the shooter a lower position on the trigger to reduce pull weight by up to 30%. The sig sauer p320 Specter Comp’s slide is a Sig Custom Works exclusive, featuring lightening cuts to reduce weight, and is optics ready. The sights are composed of the XRAY3 Day/Night sights, and mount to the slide via dovetail. Since the rear sights are separate from the optics plate, the user can install suppressor height sights for co-witnessing with a mounted optic. In addition, the sig sauer p320 Specter Comp is outfitted with the Laser Engraved LXG Tungsten XSeries grip module, with laser-engraved stippling for an aggressive feel and positive control over the weapon.

Features of the P320 Specter Comp: 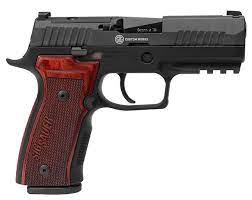