. Open Slide Design: Open top slide virtually eliminates jamming and stove piping. Allows the user to load and chamber one cartridge at a time should the magazine be lost or damaged.

. Visible Automatic Firing Pin Block: The front part of the firing pin is blocked from any forward movement until the trigger is pulled completely back. The block is located rearward, far away from the fouling and debris of the breech face. Since the block is visible, the user may ascer tain its proper operation at any time. Even if the pistol falls and strikes the ground muzzle down, the firing pin will not strike the primer.

. Rear Sight Profile: The rear sight is designed to provide a front projection so that in an emergency, the user may retract the slide single-handedly by pushing the rear sight against the edge of a table, door, etc.

. External Hammer Design: A traditional feature of Beretta pistols, this design provides the energy to the firing pin, virtually eliminating the possibility of misfires due to light primer strikes. This also provides an immediate visual and tactile indicator as to the cocked/uncocked status of the pistol.

. Reversible Magazine Release: Positioned next to the trigger guard for either right or left-handed shooters, allowing rapid reloading. Magazine drops clear when released.

. Sure, Firm Grip: The front and back of the grip are grooved on the 92FS and M9, while the M9A1 and 90-Two feature checkering. The grip frame is flared slightly at the base to enhance pointability and control.

. High-Capacity Magazines: The beretta 92fs inox family magazines are interchangeable within caliber, and range in capacity from 10 to 20 rounds in 9mm. 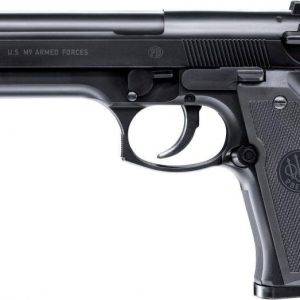 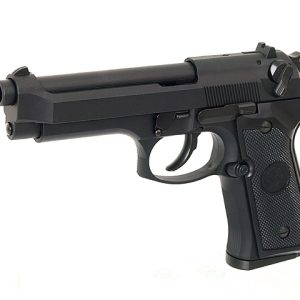